For more than a year now, the 385,000 residents of New York City’s lower West side, where I live, have been living without a single hospital bed.  I wrote previously about this sorry state of affairs here and here, wherein I summarized the saga:

Briefly: in recent years, as charity care hospitals in the city shut down one after another, or were taken over and consolidated into for-profit systems, more and more uninsured patients were being dumped at the doors of fewer and fewer charity care hospitals — which had to accept patients regardless of ability to pay — exacerbating the already deteriorating financial conditions of these hospitals until the only charity hospital left standing was St. Vincent’s.  The hospital entered bankruptcy proceedings in 2005.  Meanwhile, during the real-estate boom, developers had been attempting to purchase underused properties from the hospital in order to erect expensive residential towers.  Local activists held the projects at bay for a while (although the Landmarks Commission eventually approved them).  But then, for reasons that are as murky and mysterious as they are suspicious, St. Vincent’s somehow emerged from bankruptcy with its impossible debt obligations virtually intact.

A Big Willy real estate developer, Rudin, somehow scored a sweet deal from the bankruptcy court on all of the prime properties at the site of now-defunct St. Vincent’s hospital, and it is currently seeking the permits, approvals, and zoning amendments necessary to build a luxury condominium project there.  After Rudin got its deal on the St. Vincents properties at fire sale prices, it partnered with health care conglomerate North-Shore LIJ and proposed building an “emergency care center” on site in an effort to appease the outraged locals.  Together, these billion-dollar behemoths engaged the services of SKDKnickerbocker, a slick, high-powered, politically connected PR firm which created a fictitious “Westside Healthcare Coalition” and unleashed a relentless astroturf campaign on the community to garner support for its emergency care center.

Which brings us to 22 Reade Street, and the New York City Planning Commission meeting I just attended.  I signed up as a speaker. 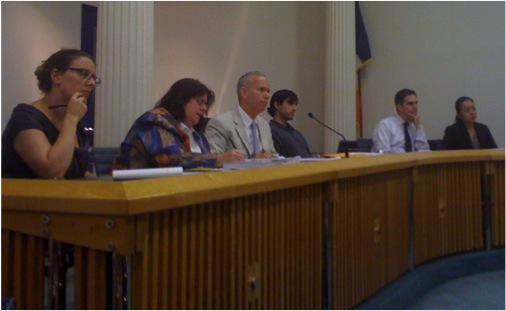 Commissioners at the meeting seemed attentive, receptive and engaged.

It was a packed house, standing room only.  Shortly after 2:00pm the meeting was called to order, and architects representing Rudin and North-Shore LIJ presented their condo and emergency care center plans, respectively, to the attentive commission.  With pretty picture boards, elaborate drawings, and glossy aerial photographs, they described the outlines of their designs.  Tear this building down, restore the facade on that one.  The care center will go here, the ambulances will park there.  This one will become five townhouses, that one, apartments.  One of the proposed features I found particularly striking was an enormous private courtyard in the center of the block for the exclusive use of the luxury condo residents.  How nice for them.

In passing, the Rubin architect called the emergency care center a hospital.  I snorted.

Then, as soon as they were finished and before anyone else could speak, the Rudin and North-Shore LIJ representatives packed up and left, with their lawyers in tow.

Next up were various emissaries representing my congressman Jerry Nadler, New York State Senator Tom Duane, New York State Assemblywoman Deborah Glick, and a representative from Community Board 2. They each gave prepared statements, with some remarkably common themes:

There were raucous bursts of applause every time this last point was made.  Finally, the floor was turned over to the rabble.  A colorful and diverse a cast of characters typical of the Village stood up, one by one, and said their piece.  Many told of lives saved at St. Vincents.  They spoke of our elderly and disabled neighbors who now have to travel to distant hospitals for care.  Some were eloquent, many were witty, all were passionate.

Nicholas Atkinson* pointed out that, God forbid we see another 9-11, there is “no way in hell” this little emergency facility could handle it.  “It should be need-need-need, not greed-greed-greed,” he exclaimed, to wild applause.  He told me later, outside on the street, that he was supposed to go to work today, but this was just too important.  The indomitable Yetta Kurland of Coalition for a New Village Hospital said that although there was no way she could convey in her allotted three minutes how horrific losing a hospital has been to the community, she was here to deliver 8,000 signatures — 2,500 of them gathered recently in just two days — of people imploring this commission not to approve the Rudin application if it does not contain a full service hospital.  She handed up to the commission a bound stack of documents, thick as a brick.  Tim Lunsford, a survivor of two heart attacks and a bout with cancer, momentarily pushed health care concerns aside when he questioned why we would building housing for the rich when so many in our city have no housing at all.  Jim Forat, a seventy year old man and resident of the Village for fifty years, stated flatly that without a hospital in our neighborhood, people will die — rich or poor.

Then there was Rebeca Gomez, a striking young woman who said she felt compelled to attend this meeting. “I am a rich girl!” she said, “But I am also an idealist.”  She has been trying to get her young daughter enrolled in the local public school, but has so far been unsuccessful due to chronic overcrowding.  She said she values the diversity of this neighborhood, and wants to instill those same values in her daughter.  “I own a townhouse,”she said. “And of course I would like the property value to go up — but not at the cost of health care and education!”

George Capsis, publisher of our local newspaper WestView, fearless journalist, and fierce advocate of returning a hospital to the Village, recounted for the commission the deceitful machinations of Rudin, North-Shore LIJ, SKDKnickerbocker, and the phony Westside Healthcare Coalition.  “They claim they now have a thousand signatures in support of their emergency care center,” he said.  “Yetta Kurland has 8,000.”

When it was my turn, I said this:

According to Dr. David Kaufman, a physician at St. Vincent’s for 30 years who is now at Beth Israel:

This Planning Commission is the agency charged with the conduct of planning relating to the orderly growth and development of the City, including adequate and appropriate resources for, among other things, the health and welfare of its population. Given the facts regarding emergency care leading to hospitalization, and waits for beds, the Rudin/North Shore LIJ project absolutely does not include “adequate resources” for “the health and welfare” of New York City’s population.

This is unconscionable. Our community needs a hospital. As taxpayers and citizens, it is a reasonable demand, and we demand it.

Thank you for hearing me.

Of course, not all of the community speakers were on the side of a hospital.  Well actually they all were, except for one.  A Dr. Gil Horowitz, “ex-director of the Washington Square Lower Fifth Avenue Association,” stormed the dais and proclaimed that the very same people here today demanding a hospital opposed St. Vincents. “It was too big, you said. Too small. Too this. Too that. This is the community of no.”  According to Dr. Horowitz, the facts were clear: an emergency care center would be good enough for 90% of the cases, and the rest would be moved swiftly to other hospitals.  The project would provide union construction jobs, and the new residents would contribute to community.

He was soundly booed.

Now about those numbers.

North Shore-LIJ claims that 94 percent of patients arriving at their proposed emergency care center would not require transfers to hospitals.  I know not from whence this 94% number comes.  In its last full year of operation, about 60,000 patients arrived at St. Vincent’s emergency room, of which 13,572 were immediately admitted to the hospital.  This works out to 77% of emergency room patients who did not require hospital admission — and 23% who did.

But I will give North Shore-LIJ the benefit of the doubt and use its 94% number (I am nothing if not beneficent).  Let’s see if my silly ladybrain is up to some more math.

We will assume that 60,000 cases visit this emergency care center the year it opens, and that 94% of these patients do not require hospitalization (or an operating room, a burn unit, or other immediate Level One trauma care).  That leaves 6% who would need to be transferred:  3,600 very sick people.  Three thousand, six hundred of my neighbors will be put back on an ambulance for another ride — an expensive ride,  no doubt — to, you know, an actual hospital.  That works out to ten people, on average, every day.  It also doubles costs:  two ambulance rides, two emergency room facility charges, and two physician evaluations, before admission to a hospital.

Who in their right mind would accept this?  (I’m looking at you, Ed Koch.)

And if I now rescind my magnanimously granted benefit of doubt (and I am nothing if not capricious) and use the actual 2009 number instead, then we are talking about roughly 13,500 transfers to hospitals.  That works out to 37 people, on average, every single day.

Just yesterday, the New York Times reported on a study recently published in The Journal of the American Medical Association:

When heart attack victims are taken to hospitals that aren’t equipped to perform lifesaving procedures to open blocked arteries, standard medical guidelines recommend they be transferred to another hospital within 30 minutes. Yet only one in 10 patients is transferred in that time, a new study has found.

The patients whose transfers were delayed were more likely to die than those transferred quickly, the researchers also found.

As it turns out, they were more than twice as likely to die.

I try to refrain from clichés, and especially from maudlin ones.  But I know of no other way to say this:  this hospital really is a matter of life and death.

In entirely unrelated news, the taxpayers of the United States of America are funding new hospitals in Iraq and Afghanistan, where military clinics and field hospitals have supplied health-care services to civilian contractors, to the tune of more than $1 million a month, without seeking reimbursement.

We now return to our regularly scheduled outrage.

__________
*Note: The Palace sincerely apologizes for any misspellings of the names of these speakers.  The meeting was long, and after it was over other obligations required my swift departure.